This mushroom is the second most widely cultivated mushroom in the world. It has been a popular food source in the cuisine of Asia for hundreds of years. Following recent improvements in cultivating techniques, it is rapidly becoming a favorite in markets and on dining tables. In addition, people can now grow it at home using simple kits prepared by mushroom specialty companies. 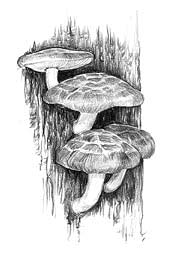 The shiitake has a medium-sized, umbrella-shaped, tan to brown cap. The edges of the cap roll inwards. The underside and stem are white. You will find many variations when you shop for this mushroom.

It has been estimated that the origin of shiitake mushrooms can be traced to the cretaceous period, over one hundred million years ago. It is found growing wild in the mountainous regions of China, Japan, Indonesia, and Taiwan. The scattering of shiitake spores has been traced using typhoon wind patterns as the mushrooms were dispersed from one to the other of these countries. It is not found wild in the United States or elsewhere.

In China it is called dongo and shanku. When served in Chinese restaurants here it is called “the black forest mushroom.” The Japanese call the most highly prized and priced specimens donko. These have closed caps. Koshin types (spring season variety) have open caps and are less expensive.

The Chinese were the first to cultivate this mildly fragrant mushroom more than six hundred years ago. Yield and quality varied from year to year until scientific techniques were developed. Japanese scientists developed a method of inserting pencil-shaped plugs of mycelial spawn grown from specially selected varieties of Lentinus edodes into holes bored in oak logs. Carefully watched over in the forest, the prepared logs carried out the work that supported the entire shiitake industry. Today it is grown in the United States as well as in Asian countries on a variety of materials containing cellulose, such as sawdust enriched with rice bran. It is sold fresh as well as dried.

In Japan and China the chemicals found in shiitakes have been analyzed for medicinal properties. Extracts have been used in treating cancer, and claims have been made that they reduce cholesterol, enhance sexual power, prolong life, kill viruses, and improve circulation. Most people will be skeptical of such panaceas, but at the very least, this is the most enjoyable way of taking medicine we have experienced. Read Mushrooms As Health Foods by Kisaku Mori if you want to know more about the subject (see Bibliography).

Shop with care when purchasing dried shiitakes, since there are many grades and prices. The caps may be thick and fleshy, or thin; large or small; cracked on top or smooth. The very thick, cracked-topped donko types are expensive, but worth the price. They are meaty and can stand up to any food.

In the United States bottled extracts of shiitake are sold for medicinal purposes, and it is packaged as a powder.

Because shiitakes grow on wood or other coarse cellulose materials, the fresh mushrooms are very clean. Brush the caps lightly. As a rule, the stems are tough, so cut them off using a knife or scissors. The stems can be used to add flavor to stock.

Shiitake mushrooms will enhance the flavor of most foods. It is also tasty by itself, cooked several different ways. It accents vegetables, meats, seafood, poultry, and even other mushrooms. The classic way of handling dried caps is to simmer them in water with a little soy sauce to make a shiitake bouillon. Added to a light cream sauce, the shiitake is ideal for flavoring pasta dishes.

Reconstitute dried mushrooms by soaking in hot or boiling water for 20 minutes. Save the liquid to include with your food for another dish. Pour off the liquid at the top to separate it from any debris at the bottom of the dish in which it was soaked.

When dried, they store well in closed glass containers.

Serves 12 as an appetizer

Serves 4 to 6 as a first course

Serves 4 as a main course

Chicken in Red Wine with shiitakes

Serves 5 or 6 as a main course

Serves 4 to 6 as a main course

About the Author: admin